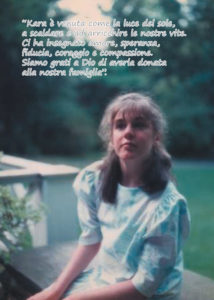 Maria Kara Bobowski was born in the town of Hartford in Connecticut (USA) on 12th August 1971. She was the first-born of Davide Bobowski and Sandra Bonvicini.

At first Kara grew well: she was a pretty and smiling baby, but at six months she started to develop health problems that were diagnosed as “epilepsy fits”.

At eleven months the doctors found out that Kara was suffering from tuberose sclerosis. During her growth, she had more and more epilepsy fits that delayed Kara’s development, without breaking her merry and joyful disposition.

At three Kara came over to Italy for the first time with her family to know her relatives that still live in Piacenza and in Modena. Kara attended the nursery-school and then the primary school pursuing an individualized educational programme.

In September 1980 she began the rehabilitating plan aimed to mentally disabled children that was suggested by the Istitutes for the development of the human potential of Philadelphia. Kara worked very hard, even though she suffered from daily epilepsy fits, to bring the programme to an end, even if it was phisically and mentally weary. Although Kara was compelled to be admitted many times to hospital, she took up her exercises as soon as she had recovered. She was helped and supported to carry out her working programme by some volunteers who became her close friends.

Her courage, perseverance, love, enthusiasm and unflinching spirit touched the heart of everybody who got to know her.

Around that time Kara knew a friend, Emanuela Pascali and her family. She spent many weeeks with them in hospital in Philadelphia. In July 1988 Kara, during her second journey to Italy, came with her family over to Modigliana, to visit her friend Emanuela. Kara liked holidays, to visit unknown places and to eat in restaurants. Kara died suddenly of a heart attack when she was twenty, on September 13th 1991.

“Kara came as the sunshine, to warm and to enrich our lives. She taught us love, hope, trust, courage and compassion. We are grateful to God for having given her to our family.”

In 1992, when the Social Co-operative was made up, Franca, Emanuela’s mother and the current President, decided to name it after Kara, in memory of a strong and brave girl.